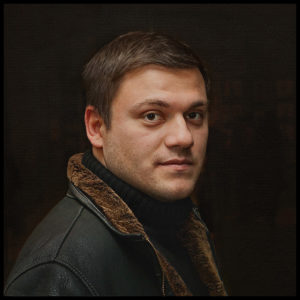 Alexey Samoylenko is a Ukrainian collage art photographer who managed to win a lot of victories in national and international photography contests. His works are vivid examples of classic Kharkiv art photography, which have been repeatedly exhibited in many European galleries.

Today the photos made by this master are known in the world not only due to exhibitions and victories in contests. They decorate numerous private collections of Ukraine, Germany and Great Britain. They are purchased as valuable gifts and brilliant examples of modern photography.

The historical artwork of the photographer displays his views on the world around us, the history and culture of the different peoples inhabited the territory of Ukraine. An important place among them is occupied by compatriots, about whom the author says the following:

“And yet, what an amazing people of Kharkov! Their behavior reflects the entire centuries-old history of the city … However, the greatest pride of the Kharkiv citizens is their desire to conquer Olympus in any field of activity. Whether it is art or science, sports and culture, Kharkov citizens strive to be the first. It only speaks of how gifted people of Kharkov are.”

As a true Kharkov citizen, A. Samoylenko does not stop on the creative path to victory. He does not doubt that even in weakness everyone can gain the greatest power if he learns to be open before the face of Nature:

“If you want to see the world, then open your soul to meet Nature. It will open all its abilities for you and fill you with unforgettable emotions. And if you are an adventurer, then fall for the impulses that Nature offers you. If you are a courageous person, then find the strength to show your weakness in front of Nature and obey its beauty. Since you are a person of beautiful nature, able to feel the slightest fluctuations of the wind, just love Nature.”

The sincerity of his words is confirmed by a series of works created for the photo project “History of Ukraine”. The art works included in these collections are imbued with a sense of deep reverence for the country’s history and pride in its rich past. To look at history through the eyes of an artist, to plunge into the atmosphere of that mysterious and incomprehensible feeling – is this not the most valuable gift?

A series of art photographs from the History of Ukraine acquaints the viewer with the peculiarities of the of Ukrainian culture development, with its religion and life in a period spanning over forty centuries.

Thanks to the project, a viewer can see different eras of the Ukrainian history:
• Late Paleolithic;
• Trypillian culture;
• Kipchaks tribes;
• the appearance of the Greek colonies;
• domination of the Scythians in the steppe regions;
• the foundation of Kievan Rus;
• the birth of the Cossacks.

A means to visualize each work is a photograph. With the help of a collage, it turns into an illustration of a historical event, a portrait of a character or a picture of the life of an ancient people.

Ancient deities come to life, forest spirits breathe softly – reality is mixed with an old fairy tale with the help of the strongest magic, which name is Art …